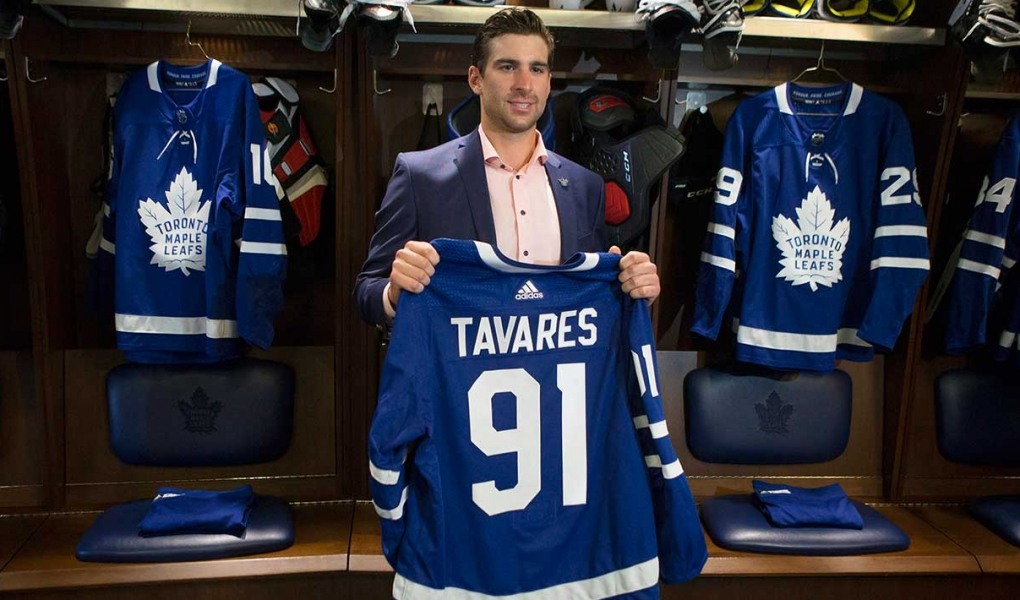 Tavares was drafted first overall in 2009 and was considered the best NHL prospect since Sidney Crosby. Despite his talents, he only managed to lead the Islanders to the playoffs three times with one series victory. He also only eclipsed 80 points three times.

Much of that has to do with the team around him. Tavares simply didn’t have the right players surrounding him, outside Mathew Barzal last season. He now enters a situation where he will join a fellow star in Auston Matthews and help co-lead a team that has Stanley Cup aspirations. Now is his time.

The Leafs finished 105 points last season and tied for second in goals scored. While Tavares won’t solve the Leafs’ defensive woes, he’ll take their offence to a new level. This new Leafs team might be the first team in nearly a decade to break the 300-goal barrier.

If that happens and the Leafs find themselves atop the standings again, Tavares could earn his second Hart Trophy nomination. Even with Matthews’ presence, his addition propelling the Leafs to new heights will sway voters to give him the edge.

While Tavares has been hogging all the headlines, he’s not the only favourite to win the Hart trophy. Here are the frontrunners to win the prestigious award:

McDavid was so good last season that pundits were making an argument he deserved to win the Hart trophy despite how poorly Edmonton was playing. Regardless, McDavid captured his second straight Art Ross trophy as the league’s leading scorer becoming the first to do so on a non-playoff team.

Edmonton was a hot pick to win the Stanley Cup last season and they flopped even before halfway through the season. They are expected to bounce back this year despite not making too many offseason upgrades.

If the Oilers recapture their 2016-17 form and return to the playoffs, it’ll be because of McDavid. He will again be on top of the scoring race and could earn his second Hart trophy in three years.

Crosby hasn’t led the league in scoring four seasons. He hasn’t even broken 90 points since and yet here he is as the second-biggest favourite next only to McDavid. While many still consider him the best in the game, his lack of stats hurts his chances at ever winning MVP.

While Crosby’s two-way play has improved, he’ll be more in contention for the Selke trophy much like Anze Kopitar and Jonathan Toews. But he’s still Crosby and at just 31-years-old, he still has plenty left in the tank. A 100-point explosion isn’t crazy to think about.

With McDavid already ahead of him in terms of production, Crosby will have to kick it back into high gear if he is to warrant Hart consideration again.

Even with the addition of Tavares, Matthews remains the face of the Leafs’ franchise. Matthews has the most goals in Toronto for the last two seasons and he could break out and score 50 this season, leading the entire NHL.

Matthews’ biggest competition for the Hart will be his new teammate. But should he continue being the team’s main goalscorer, he might just edge Tavares as the team’s representative. He already has more chemistry with the team.

It also depends if he gets the lion’s share as the centre for the top line. If he does and increases his production in all areas, he could steal Tavares’ thunder and be the team’s Hart trophy candidate.

Mark Scheifele (+1500): the Jets will once again be one of the best teams this season and Scheifele is their heart-and-soul. Not only is he a point-per-game player but is their best two-way forward. The presence of Patrik Laine and Black Wheeler could hurt his chances, but he is their MVP candidate.

Evgeni Malkin (+1800): he’ll always live under Crosby’s shadow but “Geno” has been just as valuable to the Pens. He led the team in scoring last season with 98 points, his best output since 2011-12. Pittsburgh will again be a 100-point team and Geno should warrant Hart consideration with another strong showing.

Brad Marchand (+2800): last season saw Marchand complete his evolution from an agitator to a bonafide star. He finished fourth in points-per-game (1.25) and led Boston in points, plus-minus, and game-winning goals. If he lessens the antics and continues his torrid scoring, he could earn his first Hart nomination.

Johnny Gaudreau (+5000): the Flames revamped and if they make the postseason, “Johnny Hockey” will be their MVP candidate. He led the team in assists, points, and power play points and had the most ice time among forwards. Even with big seasons from Matthew Tkachuk and Sean Monahan, Gaudreau is the man.

One of the most fun things to pick about the NHL is which player wins what award. Every fan puts their “hockey expert” hat on and makes preseason picks all the time. Luckily, online sportsbooks offer a chance to profit off these picks by using their props and futures betting lines. Sign up for a bonus.