Checking the NHL standings, as we roll into Week 3, we find some surprises at the top and bottom of both Conferences. Playing above expectations, New Jersey leads the East standings as the Devils are off to a 4-1-0 start. That hot run has pushed the Devils Stanley Cup futures odds from +10000 to +4000 on the NHL betting board at SportsInteraction. Toronto, one of our preseason choices, is a tiebreaker behind New Jersey along with four other squads that are tied with eight points. Mid level chalk three weeks ago, the Rangers (1-5-0) and Canadians (1-3-1) are both underachieving.

Previous Update: Prior to the NHL Week 2 schedule. 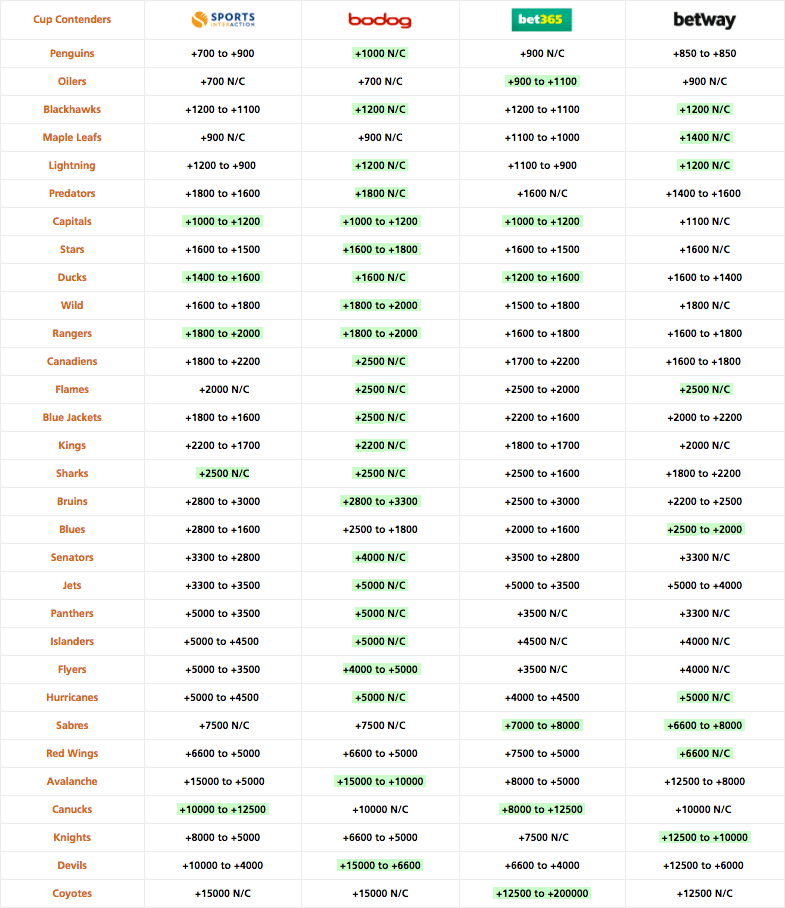 23/05/18 Game 7 East Final Update: Liking Tampa Bay's East title chances - we stayed away from hedging our investment below. A Bolts win tonight earns a +1300 return while a Caps victory is a -200 loss. Down to a one game showdown, between the Lightning and Washington Capitals, bettor's have an opportunity to back up this bet. Betway is currently offering the best money line (+125) so a simple 200-Unit investment guarantees no loss and a +1100 or +50 return. Depending on your betting style, kicking it up to a 500-Unit Caps ticket will return +800 TBL and +425 WAS. If you made this wager - we suggest protecting it. Enjoy Game 7 - looking forward to a good one.

Normally reflective of each other, the order on our Eastern Conference Championship futures board doesn't match the order of the East standings as we head into Week 3. Playing beyond their normal defense first mantra, New Jersey is sitting first in the East and they are the second highest scoring (4.20 GPG) team in the NHL. That hasn't impressed bookmakers much as the Devils are priced from +2200 at Bet365 to a +3300 best price. We still advise against buying in on New Jersey.

At the other end of the spectrum, Toronto, Pittsburgh and Tampa Bay have moved into a tie with a +425 NHL Championship price at SportsInteraction. The Maple Leafs and Lightning are both 4-1-0 while the Penguins (3-2-1) have not lost since dropping their first two games. Detroit, who enter the history books as the first team to beat the 4-1-0 expansion Golden Knights, just went 3-1-0 on a long road trip and the Red Wings price fell (+7500 to +2800) as their win total went up.

Underperforming, Edmonton's 1-3-0 record is the second worst Western Conference mark. The Oilers have dropped three straight and sit just one point ahead of the Arizona Coyotes in the Pacific Division basement battle. Bet365 is the first book to bail on Edmonton as they jacked up their price (+350 to +520) week over week. We respect Oilers coach Todd McLellan and believe that he'll get Edmonton rolling in the right direction. Chicago (4-1-1) is now consensus second chalk in the West.

Leading the way, as the lone team that's still unbeaten in regulation time in the West, Los Angeles (4-0-1) has seen their preseason price shrink (+1200 to +850) considerably. The Kings 1.80 team goals against average is second only to Ottawa (1.60) and goaltender Jonathan Quick appears to have put his 2016-17 season ruining injury woes behind him. After opening with four straight wins, St. Louis (4-2-0) lost two in a row but SportsInteraction still dropped (+1400 to +750) their price.

Happy National Basketball Association Tip-Off Eve Everybody! Completing a confluence of wagering action, the seven most bet on sports in North America will all be running at the same time when the Boston Celtics vs Cleveland Cavaliers rivalry re-fires at 8:00 PM ET on October 17, 2017. NBA games join the playoff races in baseball, the CFL and MLS, plus the NHL, NCAAF and NFL regular seasons. Check the Quick Access bar above to bet on the futures of your choice as each of the "Significant Seven" sports are posted with Championship prices from the best linemakers in the business.

What's a Canuck 'Capper to do when faced with a rare Monday night with just one NHL contest on the slate? Since a wager on either Tampa Bay or Detroit individually isn't possible, at any of the local lottery retailers, we're reminded why online sportsbooks crush the Canadian Government betting offers. Canada Sports Betting top rated bookmakers, conveniently listed below, are ready, willing and able to accept single bets on the Lightning vs Red Wings game or the Yankees vs Astros MLB MLB playoff matchup for that matter. One-wager tickets are available every day at these betting giants.

While the 2021 NHL entry draft isn't viewed as being as deep as the 2020 class, as with Alexis Lafreniere last season, there appears to be a consensus No. 1 - Michigan's Owen Power. The Wolverines freshman defenceman didn't look out of place playing with the men at the IIHF world championship, winning a gold medal skating for Canada, playing in the top defensive pairing. Power is almost certainly going to the Buffalo Sabres.

Canadian hockey fans have it made. There is no shortage of ways on how to watch the NHL. Whether it's TV stations or online streams, fans can tune in using their phones, tablets, or kick it old school by watching on television. Gone are the days where you had to go to one room and wait for one time to watch the NHL. Here are the many ways to watch the NHL in Canada.

The Tampa Bay Lightning are one win away from capturing their second straight Stanley Cup title. They lead the best-of-seven Cup final series against the Montreal Canadiens by a 3-0 count. In the Cup final for the first time in 28 years, Montreal has lost nine of 33 previous Stanley Cup final series. However, the Canadiens have only ever been swept in a final series one time in their history.

The Stanley Cup has gone through some unique firsts during the past two NHL seasons thanks to the COVID-19 pandemic. Last year's Cup final series didn't end until September. This year, with the launch of the regular season delayed until January, the Cup final series is stretching into July. One facet that hasn't changed, though, is that no matter when wagers are placed on the games, the bettors want to be certain that they are placing those wagers with the best betting sites for the Stanley Cup Finals.