The year was 1993. Brian Mulroney was the prime minister of Canada. Bill Clinton was the president of the United States. And the Toronto Blue Jays were on their way to winning their second straight World Series title. It was also the last time a Canadian team won the Stanley Cup in the NHL playoffs.

The 1993 Montreal Canadiens, led by captain Guy Carbonneau, squared off against the Los Angeles Kings and one of the greatest hockey players of all time in Wayne Gretzky.

The Clarence Campbell Conference champions won the first game before the Canadiens reeled off three straight overtime victories. The Prince of Wales Conference champs finished off the series 4-1 at home at the Montreal Forum on June 9, 1993. Gretzky did not manage a shot on goal the entire game.

A turning point in the Cup final came in Game 2 with the Canadiens trailing 2-1 and 1:45 left in the third period when coach Jacques Demers called for a measurement on Kings defenseman Marty McSorley’s stick, which had an illegal curve.

McSorley went to the penalty box and Demers pulled goalie Patrick Roy for a two-man advantage. Eric Desjardins scored on the power play and then added the winning goal in OT.

With the four games to one series win, the Canadiens clinched their 24th Stanley Cup championship. Roy won the Conn Smythe Trophy as the most valuable player of the Stanley Cup playoffs for the second time (1986, 1993).

I remember when Jacques Demers got on the ice during the first practice of the season," recalled Roy. "He said to us: ‘Guys, we’re going to shock the hockey world and win the Stanley Cup.’ We all looked at each other, questioning whether or not we’d missed something.

"He brought that determination to everyone on the team and it led to the results that we know of today.”

It was a remarkable playoff journey for the Canadiens and their fans, including a record 10 straight overtime playoff victories. The team lost just four games in all four rounds of the playoffs.

"It wasn’t a year we were picked to win, especially going into the playoffs," said defenseman Mathieu Schneider, who was 22 years old at the time.

"We had such a rough time at the end of the season. (The postseason) was an incredible couple of months for us.”

The Canadiens finished fourth in their conference with a 48-30-6 record — 17 points behind the conference-leading Pittsburgh Penguins — but beat the NHL odds and won the 1993 championship.

The defending Stanley Cup champions finished fifth in their conference the following season and were eliminated in the first round of the NHL playoffs. 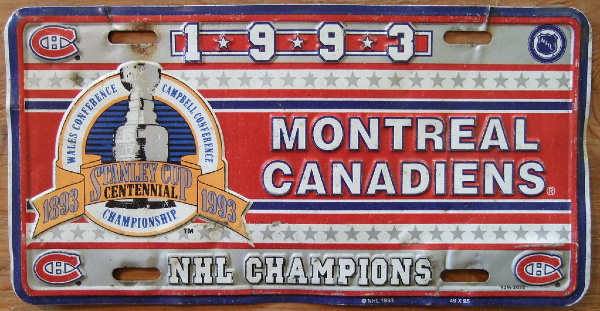 It's hard to believe that one of Canada's seven teams hasn't won the championship in almost three decades. Before the Canadiens' victory in 1993, Canadian teams had won the Stanley Cup in seven straight seasons from 1984 to 1990 with the Edmonton Oilers taking five of those finals.

Now it seems Canadian teams can't even get into the final, never mind win Lord Stanley's mug. Here are some of the recent close calls in the Stanley Cup finals for Canadian teams:

Canadian Teams and the Stanley Cup

The Montreal Canadiens have won the most Stanley Cups in the history of the sport since 1915 with 24 championship titles. They are the last Canadian team to win the Stanley Cup. The top five overall champions are also Original Six teams:

Today, Canadian teams represent 22.6 percent of the league with seven out of 31 teams competing for the league championship.

A weak Canadian dollar and lucrative TV contracts in the U.S. have made it easier for American teams to outspend their neighbours to the north for top free agents. But longer droughts than this have been broken in recent history.

American Pharoah (2015) smashed a 37-year drought for a Triple Crown winner and the Chicago Cubs (2016) won the World Series for the first time in 108 years, so a Canadian team will eventually beat the odds and capture the Stanley Cup.

The obvious question is when?

Click in one of the below top partners if you want to bet on the 2020 Stanley Cup champions.