Eugenie Bouchard will once again be Canada's best female chance at a major tournament when she begins her French Open campaign on Tuesday, May 30th. The match is against Risa Ozaki who is Japan's third-highest ranked player at 72. Her highest career ranking was reached in April when she hit 70th in the world.

Bouchard's preparation hasn't been ideal. She pulled out of the recent Nuremberg Cup due to an ankle injury, and there were fears she would not be ready for her first round match at Roland-Garros. She is fortunate to be playing her match late in the opening round and will have slightly more time to prepare, although it is never ideal to be sidelined immediately prior to a tournament.

Speaking of preparation, Genie has played in three clay-surface tournaments in 2017, with her best return coming in Madrid as she made the quarter-finals. Her year got off to a great start with a semi-final appearance in Sydney just prior to the Australian Open, but since then her record has been average and her ranking has fallen steadily. 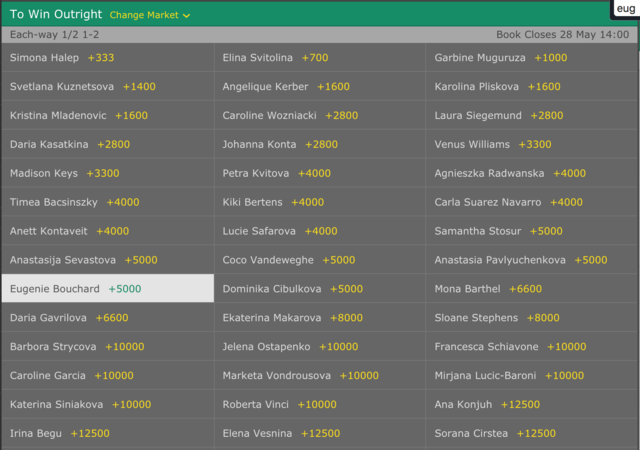 Bouchard's chances of success at the tournament may hinge on how well her ankle pulls up ahead of her first match, although if she does manage to get through it will come down to how much she wants it. Bouchard has only reached the semi-finals of a tournament once in the last twelve months and it's hard to see her excel in this tournament. It remains to be seen whether she has the hunger to reach the second week of a major tournament.

Bouchard's career high ranking of five came back in 2014 on the back of her near-fairytale Wimbledon appearance. She is yet to replicate the form that saw her reach that level though, and at the time of writing her ranking is 56th in the world.

She has not been in the top 20 for nearly two years and was last ranked higher than 30 in September 2015. Although still Canada's highest-ranked female singles player, Bouchard needs to make changes to her game to ensure she returns to the top tier of women's tennis.

When Does Eugenie Bouchard Play Next

Bouchard, despite being in doubt for much of the lead-up to the tournament, should go into her match against Risa Ozaki as the favourite. She won her only previous meeting between the two and although her ranking is falling she does outrank her Japanese opponent.

Ozaki is not to be taken lightly though - she is slowly but surely rising up the WTA rankings and comes into the match at 72, up from 100 at the start of 2017.

If Bouchard manages to win against Ozaki, she will likely be in for a second round match against seventeeth seed Anastasija Sevastova. The Latvian is currently ranked a career-best 18th in the world after starting the year at 35th. Sevastova will be a tough propect for Bouchard, so it is important she recovers quickly from her ankle injury to have any chance of progress.

Catch all the action from Eugenie Bouchard's first round match against Risa Ozaki at 2:15pm CET on Tuesday May 30th.

Did you enjoy this article? Share it!
Tweeter
Follow us!
More articles...
NFL News - 17/06/22
Bills are the slight favorites to win the Super Bowl this season

With minicamps rocking across the NFL, the excitement for the Super Bowl to get here keeps on climbing. With this, countless eyes are on teams like Buffalo, Kansas City, Tampa Bay and many more. With that said, the Bills are the slight favorites to win the Super Bowl this season, and people all over New […]

Coming soon, the 2022 NFL Super Bowl will be here and folks can't wait for the action to arrive. With that said, Super Bowl Commercials 2022 is already a trending topic and people are just as excited for the advertisements than the game. Each year, people not only enjoy watching things but also betting on prop bets too. What can people expect from the Super Bowl commercials this time around?

Over 5 crypto companies will be featured during Super Bowl 2022 commercials. It’s being dubbed the ‘Crypto Bowl’ due to large the amount of scheduled crypto ads.

How can you not be bullish on mass adoption when 100 million viewers are about to be exposed to crypto.. 🤷‍♂️ https://t.co/u9sPvYw5tK

In a brilliant turn of events for Sin City, some big news is in for the state as a whole to be honest. Indeed, Las Vegas expected to host Super Bowl LVIII in 2024 is something that folks had been hoping for ever since Allegiant Stadium was built as the new home of the Las Vegas Raiders. While this game is still two years away, people are counting down the days for this to arrive. NFL fans will be taking over Las Vegas.

Las Vegas will be the host of the Super Bowl 2024! The game will be held at the Las Vegas Raiders' Allegiant Stadium near the Las Vegas Strip. https://t.co/nd9vWNBTwy pic.twitter.com/nfRLgzyACL

Details on the 2022 Super Bowl halftime show are emerging – and from what we can tell, it is going to be quite the performance.