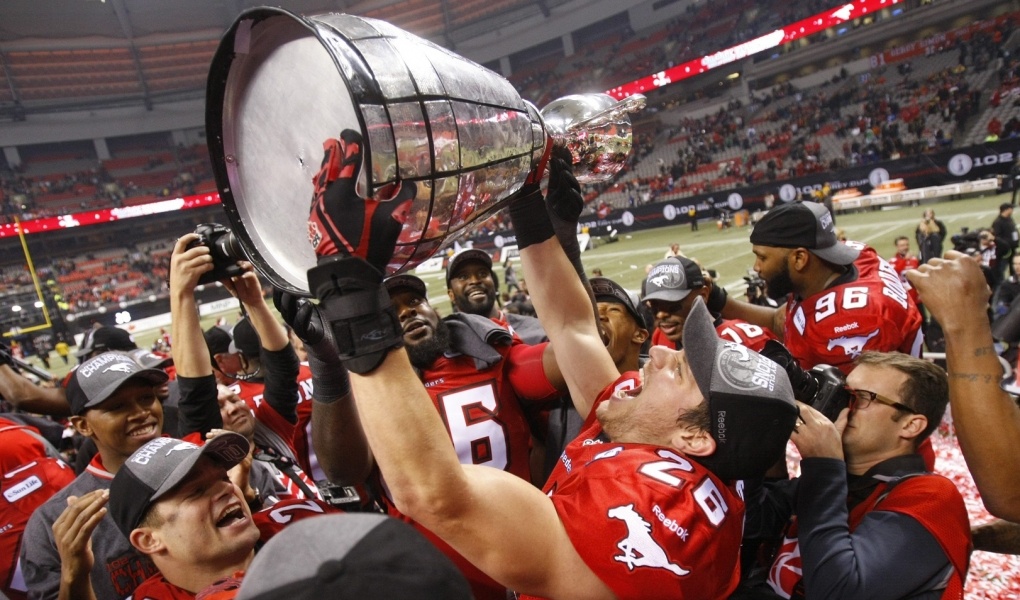 Odds to win the CFL's Grey Cup: Stampeders vs Everyone

It's the midway mark of the 2018 CFL season and as Grey Cup odds would have it, the usual suspects are once again the Calgary Stampeders. The league-leading Stamps are putting on another clinic as they are now way ahead according to bookmakers. But as the previous Grey Cups have proven, the regular season means nothing. The Stamps could finally cash out or it could be another underdog.

Here's a complete shocker: the Calgary Stampeders are significant favourites to win the CFL's Grey Cup according to the most recent CFL odds (courtesy of Sports Interaction). The Stamps are once again dominating the league with the best record including being unbeatable at home while the rest of the league struggles with inconsistency.

Calgary is -105 to win it all and the next best team are +550 or worse. But they have been here before. The Stampeders have finished with the best record in the CFL in the last five seasons but only have one Grey Cup to show for it. Getting a bye in the playoffs is all but guaranteed for the Stamps. Winning it all is another story.

My Team's Next MatchCalgary Stampeders

At quarterback, Bo Levi Mitchell continues to play like a Most Outstanding Player candidate. Most importantly, the recent losses have only continued to motivated Mitchell and coach Dave Dickenson. It's Grey Cup or bust for this team.

The Stamps' toughest tests are mostly in their own division. A few have risen up to the challenge and can be considered a decent underdog to upset them in the playoffs.

Slowly but surely, the Roughriders are grinding their way back to contention. Year three under controversial coach/general manager Chris Jones has been a roller coaster ride. From injuries to quarterback Zach Collaros to cutting popular receiver/cornerback Duron Carter, the season has been unpredictable.

The Riders have been carried by a gritty defence that has only surrendered more than 27 points twice. Saskatchewan is on a winning streak and has even beaten the Stampeders. It's unlikely they can keep this up but this is the type of team that can scrap their way to an unlikely Grey Cup win.

They are the CFL's most prolific passing offence led by reigning MOP Mike Reilly. The Eskimos have had a tough stretch losing three of their last four, all by no more than eight points. They are one of the league's best home teams but struggle to win on the road.

Their Grey Cup odds depend heavily on two factors: if they can win on the road and if they can beat their archnemeses, the Stampeders. Edmonton is only 4-11 against the Stamps including being eliminated in playoffs in two of their last playoffs. They've beaten them before and they could do it again.

The Redblacks continue to be the only consistently winning team from the paltry East, but they have plenty of work to do to prove they can hang with the best in the West. They have wins over Saskatchewan and Winnipeg but lost both games to Calgary and still have to face Edmonton.

Ottawa's defence has been solid as has quarterback Trevor Harris. But they need to be better than "solid" if they are to return to the Grey Cup. Winning the East means they only need to win two games to become champions. They've done it in 2016 as a losing team and can do it again as a better team this season.

Opposite of their "Banjo Bowl" rivals, Saskatchewan, the Bombers are trending the wrong direction. They are on a losing streak and are a Jekyll-and-Hyde team. At times they explode and play like the Grey Cup contenders they were touted to be and at times they struggle to even move the ball.

Winnipeg has also barely beaten anyone in their conference, that being the last place Lions. At this point, they are more "pretenders" but they still have the solid players on both ends of the ball to make a run. It might take a quarterback or coaching chance to do it, but don't count out the Bombers just yet.

A clearer picture of the Grey Cup odds will surface following the second half of the Labour Day rivalry games. There will be marquee matchups this weekend beginning today between Ottawa and B.C. But Saturday is the can't-miss weekend as three huge rivalry games will have plenty of playoff implications.

Let's look at the two big ones:

Part two of the Banjo Bowl heads to Winnipeg as the Bombers look to get back their loss last week. Saskatchewan is on a winning streak and Winnipeg is on a losing streak. The Riders are a solid +4.0 underdog (+155) here, especially considering their strong defence versus a struggling Winnipeg offence.

Edmonton almost had Calgary at the McMahon Stadium, but couldn't close them out. They are a much better team at home but Calgary is the league's best team for a reason. The Stamps should sweep this home-and-home series like they did in three of the last four seasons.

Next to hockey, the CFL is the next biggest thing in Canada. Don't underestimate this league. It is more prolific and has plenty of nailbiters. Fans are passionate and that includes on the betting lines from these online sportsbooks, which are the top picks for Canadians.