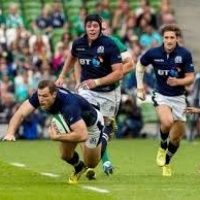 If you're looking to place a bet on Scottish rugby internationals, you have come to the right place. This page provides a comprehensive wrap of all things Scotland: result history, statistical analysis, future matches and most importantly, the best odds and lines from a selection of great betting companies. Review tournament performance, plan for upcoming fixtures and place your wager with confidence right here.

Throughout the rugby season you will find information regarding Scotland's next fixture right here, with direct links to the numbers that the popular sports books have published. Be sure to check that you have got the odds you are looking for before you place your wager.

You will find the upcoming Scotland schedule right here. Check out their latest results and take a look at odds for upcoming fixtures, or sort by home and away games to review trends and form. For past results, you can review lineups, match reports and statistics which will help give you the edge when deciding on your final bet.

Below you will find Scotland's current scores and standings, updated after every matchday. You can toggle home and away fixtures, review offensive production, view defensive statistics and even check out how the team's first and second half performances differ.

The world has Scotland to thank for the international rugby we now know and love. Back in 1871, the first ever international fixture was played between the Scots and England after the former challenged the latter to a contest. Scotland won the match on that occasion, and in doing so created one of the oldest rivalries in world rugby.

The Scots and the English now compete annually for the Calcutta Cup, a trophy that also derives from the late nineteenth century, while both teams were involved in the inaugural Home Nations tournament that we now know as the Six Nations. It's fair to say that Scotland have played helped shape international rugby as we know it today!

While the Scots have had a lot of success in their long and illustrious rugby history, they have not been able to mimic the success of past eras since the start of the Millennium. They have not won a Six Nations tournament since Italy were introduced in 2000, and have only a sole semi-final appearance in the eight Rugby World Cups played to date.

Yet there is a sense that Scottish rugby is about to turn the corner. One feels that it will only be a matter of time before the Scots challenge the world's best nations again, and the good news is that it's never been easier to bet on this becoming a reality. Below we provide you with all the best betting advice, so you can maximise your winnings on Scottish rugby matches.

Scotland has a well-established rivalry with the English team and games between the two sides are often fiery encounters. Because of the added interest, you will usually see Scotland at long odds simply because the English betting public outnumbers the Scots. Historically, Scotland only beats England around 30% of the time, but you can always be sure that you will have great odds for them whenever they face off.

You will always receive fantastic odds for the Scots to defeat the All Blacks as well, but don't fall into the trap set by the bookmakers! Scotland have come up against New Zealand on thirty occasions and are yet to defeat them, with two draws the closest they have come. While there is always a first time for everything, don't expect to see a victory any time soon.

Make sure you consider the difference between the two-outcome and three-outcome markets. The three-outcome betting line includes a draw, which while not a common result is still a possibility, whereas the two-outcome line refunds your bet in the event a tie occurs. Draws are rare in rugby, but are still a possibility that can come back to bite you. Scotland vs. England matches have a higher rate of draws than most matchups - it happens approximately 13% of the time.

When Scotland are playing teams like the All Blacks, your best option is to bet on the handicap market. Betting companies will set the line based on what they believe to be the most likely margin of victory; in this case the line may be -13.5 for the All Blacks, meaning that they would need to win by 14 points or greater. This obviously works in reverse, so that if you were to bet on the Scots at +13.5, you would win your wager as long as they lose by less than 14.

The over/under line works in a similar fashion, and is most commonly used in the total points market. Again, the sportsbook will set a figure like 30.5, and you will need to determine whether you think there will be more or less total points in the match. Do your research and also keep one eye on the weather - rain generally means less points, so if you can beat the bookie to the forecast, you might be able to secure better odds.

You will always have the option to bet in-game on an international rugby fixture, and this presents the best opportunity to reap rewards. The best advice here is to always take a note of the odds and lines on offer before the match begins.

For example, Scotland are due to play Italy in a Six Nations match. The Scots are the favourites at -180 and the handicap line is -7.5. This indicates that the betting companies think the result will likely be a Scottish win by approximately 8 points. If Italy score early and go into half-time with a narrow lead, you will be able to jump on Scotland at odds much closer to even knowing that they still have the best chance of winning the match.

Few people are aware that you can bet on outright markets like the Rugby World Cup and the Six Nations well in advance of the actual tournament. While Scotland are unlikely to go all the way in the world's showpiece event, there is always a decent chance of success in the Six Nations as the opposition is much more even across the board.

If you get in early, you will receive much better odds on the team than if you wait until midway through the tournament. Make sure you keep an eye on this market and jump on when the odds peak.

Regardless of how you prefer to bet, you can count on us to provide you with the best odds and lines from a variety of the biggest online sports betting companies. With all of the information on this page, you should have the resources you need to win big on Scottish rugby matches, so put your money down today and get ready to reap the rewards!