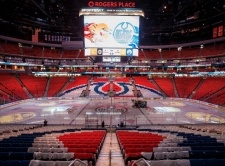 The Rogers Place replaced the Northlands Coliseum as Edmonton's leading multi-use indoor arena. It is the NHL's newest arena opening in 2016, just before the start of the 2016-17 season. The place is home to the Edmonton Oilers and the arena upgrade has somewhat sparked the franchise as they've begun to turn a corner. Public transit access to the arena is provided... [+]

As the newest arena, Rogers Place boasts the largest true high-definition center-hung scoreboard in the NHL. It features extra-wide 360 degree concourses, over 1,200 TV screens, including game coverage in all Suites, clubs and concourses and the first LEED-Silver certified NHL facility in Canada. The Place also serves as the main attraction and anchor to Edmonton's new ICE District, Canada's largest mixed-use and entertainment district.

No NHL franchise has gone between Dr. Jekyll and Mr. Hyde more than the Edmonton Oilers who went from a dynasty team to a NHL playoff team to a lottery team over the course of 30 seasons. Not too long ago, they were the laughing stock of the league consistently finishing in the bottom three despite accumulating a plethora of first-overall picks. Since the arrival of Connor McDavid, now being pegged as the best player in the league, the Oilers appear to be headed for brighter days.

The Sutton Place Hotel is one of the best hotels nearby the arena. It's just a few blocks south of the arena and is located directly across a mall for your convenience. The Courtyard Hotel Downtown gives a fantastic view of the North Saskatchewan River and the other side of town. It's a bit of a walk to the arena but the place is of great value. The Fairmount Hotel MacDonald is the furthest of the three but also offers a great view of the river and is rated five stars while being close to many shops and public transportation.