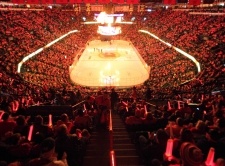 The Saddledome was built in 1983 with ice hockey in mind replacing the Stampede Corral as the Calgary Flames's home. It was originally named the Olympic Saddledome and hosted the 1988 Winter Olympics. Today, it also doubles as an entertainment avenue and hosts events for the Calagary Exhibition and Stampede. [+]

The Calgary Roughnecks of the NLL also play here. Since its establishment, a series of major renovations have taken place at the Saddledome although it remains one of the oldest NHL arenas.

Despite its age, the Saddledome still features state-of-the-art equipment making it a great place for hockey. Saddledome has a combination of metal halide and incandescent lighting. The sound, over 6,400 roof panels coupled with fine acoustical engineering let's the noise reverberate throughout the arena so both the hockey game and Flames fans can be heard to the maximum.

Since moving to Calgary in 1980, the Calgary Flames have been overshadowed by their provincial rivals, the Oilers but have a rich history for themselves. The Flames won a Stanley Cup in 1989 and almost won another in 2004 but have barely made it past the first round since. They were anchored by prolific scorers like Theo Fleury, Jarome Iginla and Al MacInnis and now have a young core of players ready to bring Cowtown back to its glory years.

The Saddledome is a bit on the edge of the outskirts of downtown Calgary but there are still great hotels within a kilometer. Hotel Le Germain Calgary is a beautiful hotel that is an attraction in its own right. Calgary Mariott Downtown Hotel is consistently rated highly and has some of the best-reviewed staff and cleanliness. The Hotel Arts is the closest among these three venues and has great customer service and food.