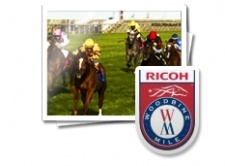 The Ricoh Woodbine Mile is a $1,000,000 Grade 1 race for three-year-olds and up held each September on the EP Taylor Turf course at Woodbine. The first race was held in 1988 as the Molson Export Challenge run at 1 ¼ miles and was originally restricted to three-year-olds.  The current distance and conditions have been in place since 1997. Over the years the sponsor has changed, and it was for several years known as the Atto Mile.

Finding a racebook that caters specifically to a Canadian clientele isn’t always easy, but that’s specifically what we do, so you’re in luck. The following racebooks are our highest rated picks, and offer odds and wagering on Canada’s biggest tracks.

As part of the Breeders’ Cup Challenge series, the race is a ‘Win and You’re In’ event, as the winner automatically qualifies for the Breeders’ Cup Mile, to be held this year on the first weekend of November at Santa Anita. Last year’s winner, Wise Dan, would in fact go on to capture the BC Mile in track record time. The 2005 Woodbine Mile winner, Leroideanimaux, would go on to finish second in the BC Mile, and would gain an Eclipse Award as America’s best turf horse that year.

Another previous winner, the filly Ventura, captured the 2009 race after winning the Breeders’ Cup Filly and Mare Sprint the year before. After winning the Woodbine Mile in 2009, Ventura went back to the Breeders’ Cup to try and defend her F & M Sprint title, but fell just short, finishing second. She was the first filly to win the Woodbine Mile in 13 years, and in doing so set the race record at 1:32.0.  The most recent Canadian-bred winner was Rahy’s Attorney in 2008.

In addition to drawing an international field of great horses, the Woodbine Mile’s winner’s list is dotted with the names of some of the most well-known riders of the past several years. Hall of Famers Pat Day, Corey Nakatani and Eddie Delahoussaye have all visited the winner’s circle, and Kent Desourmeax, John Velazquez and Garrett Gomez share the record with two wins each. In 1995, Julie Krone became the first female rider to win the race aboard Peaks and Valleys.

In 2004, Quiet Resolve – a son of American Triple Crown winner Affirmed – was awarded first place when the original winner, Hawksley Hill, was disqualified and placed fourth. The victory by Quiet Resolve would give Sam-Son Farm their second of three Woodbine Mile titles, the most among any owners. American Hall of Fame trainer Neil Drysdale holds the record for most wins by a trainer with four. Drysdale’s run began in 1989 with Prized, who would then go on to capture that year’s Breeders’ Cup Turf.