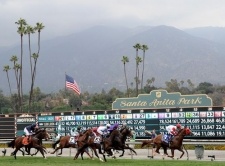 The Breeders' Cup Turf is the premier distance race on the grass in North America. Offered for a purse of $3 million in 2016, the race draws elite talent from all over the world for the mile and a half test. Foreign runners have dominated the Breeders' Cup Turf since its inception in 1984, including 13 wins since 2000. Qualifying or "Win and You're In" races for the Breeders' Cup Turf include events from Argentina, Brazil, Japan, England, the U.S, Germany, and Ireland.  [+]

Usually carded as the penultimate event of Breeders' Cup Saturday preceding the Breeders' Cup Classic, the Turf occupies premium wagering attention. The race typically comprises the first half of the late daily double, the third leg of the late pick 4 and the fifth leg of the lucrative Breeders' Cup Pick 6. With so many eyes on the BC Turf, the wagering pools are super-charged, providing excellent opportunities for all betting ventures from conventional to exotic.

Regardless of when players play or how often they play, it's more than beneficial to use an online racebook. Aside from the obvious virtue of convenience, bettors realize more value when they play from one of the trusted online racebooks below. From rebates, bonuses and loyalty programs, the best racebooks put more money back into players' accounts, keeping them in action longer and making big race days such as Breeders' Cup weekend even more profitable.

The Breeders' Cup Turf pits the best of the best from all over the world against one another at the ten-furlong distance. Winners of past Breeders' Cup Turf events include such stars as Conduit, English Channel, Shirocco, High Chaparral, Northern Spur, Theatrical and Pebbles. The United States representatives generally play the role of the underdog despite racing in their home country as turf racing is more prominent in Europe. The vast majority of all BC Turf winners have been trained by foreign connections.

For obvious reasons, it is a good strategy to key on a European runner in the Breeders' Cup Turf, but elite American runners have managed to find the winner's circle in recent years with Main Sequence (2014), Little Mike (2012), and English Channel (2007) representing the home team. European runners getting Lasix for the first time have proven to be exceptionally dangerous bets as the filly Found proved in 2015. Another angle to consider is how the Euros will transfer their form from the undulating, one-turn courses across the pond to the counter-clockwise, two-turn courses in North America. Conduit, an Irish-bred runner, is the only horse to pull off consecutive BC Turf wins and proved that his fondness for American racing superseded his best form in Europe.

While the BC Turf is a stamina-oriented test, there have been notable theft jobs in recent years. Highland Reel, while quick from the gate, had never shown the type of raw gate speed shown while winning the 2016 edition of the Turf. Jockey Seamie Heffernan opened up by nearly ten lengths down the backstretch and simply ran a capable field off of their feet. The well-regarded American hopeful Flinshire closed nicely but could do no better than second. Meanwhile, 2015 winner Found finished third behind her winning stablemate. The race marked trainer Aidan O'Brien's second consecutive win in the Turf and sixth in his career.