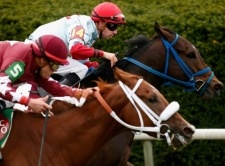 Inaugurated in 2008, the Breeders' Cup Turf Sprint attracts many of the fastest horses on the grass and has proven to be a popular addition to thoroughbred racing's biggest weekend. Offered for a purse of $1 million, the event is capped at 14 runners and is an oddity in that its distance is dependent on the configuration of the hosting track. When held at Santa Anita, for example, the race is run at 6.5 furlongs. [+]

At Keeneland, the race was run at 5.5 furlongs, and 5 furlongs at Churchill Downs. With daily double, pick 3, exacta, trifecta and superfecta wagering available in addition to conventional win, place and show bets, the Breeders' Cup Turf Sprint receives copious wagering action as do all of the Breeders' Cup events. Because betting pools are exponentially larger than average racing days, the Breeders' Cup provides an excellent two days of wagering opportunities for horse players.

Whether you're a serious bettor or a casual player, wagering from the convenience and ease of a laptop or mobile device allows you much easier access to the action. In today's competitive online wagering market, these racebooks offer bonus, loyalty and rebate programs that make it easier to stay profitable while playing the races:

Bettors that enjoy a truly wide-open race appreciate the helter-skelter nature of the BC Turf Sprint. With a plethora of elite speed and runners who possess a late closing kick, the race often unfolds in dramatic fashion, with thrilling finishes the rule rather than the exception. As a betting race, the BC Turf Sprint provides players with ample opportunity to catch large prices with bets like the trifecta and superfecta occasionally providing life-changing scores.

While there is certainly no recipe to bet on the Turf Sprint effectively, there are a few general principles that may help bettors narrow their selections. First, the "horse for course" angle cannot be overlooked, particularly when the event is held at Santa Anita's unique "downhill" course. The filly Mizdirection defeated males two years in a row to claim the Turf Sprint in 2012 and 2013 at Santa Anita over a course she had demonstrated an affinity for. While probably not the most talented runner in the field either year, Mizdirection simply elevated her game on the downhill course while other runners struggled to adapt.

Another type of horse to look for in the BC Turf Sprint is the speedy route horse turning back to a sprint distance. This angle proved successful for both Bobby's Kitten (2014) and Obviously (2016). In a race where positioning and trip mean everything, it's usually wise to avoid horses who come from more than four or five lengths off the pace at the first point of call.

Once considered the best turf miler on the west coast, the aging gelding Obviously entered the 2016 Breeders' Cup Turf Sprint as an intriguing player, but one who certainly had his work cut out for him. While attracting a large share of the early betting action, Obviously went to post at odds of 9/2 and came out of the gate firing on all cylinders.

Assuming his customary spot on the front end, the fan favorite had just enough in the tank to hold off a furious rally from Om to earn the biggest win of his career.