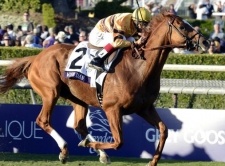 The most prestigious eight-furlong race on the grass in North America, the Breeders' Cup Turf Mile draws elite runners from North America, Europe, South Africa, South America and Japan for a truly world class event. Currently offered for a purse of $2 million, the BC Mile has produced some of the deepest and most talented fields in the history of the Breeders' Cup event... [+]

...with such superstars as Tepin, Wise Dan, Goldikova, Da Hoss, Lure and Miesque among the race's past winners. The race is among the original Breeders' Cup events inaugurated in 1984 and is currently tied to nine different automatic qualifying or "Win and You're In" races in eight countries.

One of the featured events of the Breeders' Cup Saturday card, the Mile is often part of both the late pick 4 and pick 6 wagers ending with the Breeders' Cup Classic. With fattened Breeders' Cup pools enhancing the conventional and exotic bets, the Mile is yet another tremendous betting opportunity for horse players. With superstars and repeat winners such as Goldikova (2008-2010) and Wise Dan (2012 and 2013) winning the race in recent years, many multirace exotics players have chosen to "single" the Breeders' Cup Mile, but in other years the race has produced more generous prices. The race is always a lynchpin to the aforementioned Pick 6 and Pick 4 wagers.

Bettors looking to take advantage of convenience and betting value can do both once they find a secure and trusted online racebook. The following racebooks allow bettors to enjoy the action from a laptop or mobile device while also realizing increased profitability.

Many racing purists and bettors alike recognize the Breeders' Cup Turf Mile as a pure test of raw ability and class. With the intriguing element of the very best from around the world going head to head, the Turf Mile is almost always one of the best and most contentious events of the Breeders' Cup weekend. In addition, the race has produced large payouts over the years with longshots like Karakontie (2014), Court Vision (2011) and Miesque's Approval (2006) lighting up the tote board. The race has also solidified and immortalized greats like Tepin, Wise Dan, and Goldikova by adding unforgettable moments to their Hall of Fame careers.

The Breeders' Cup Mile often requires bettors to make several fine-line decisions. From post position to recent form, to pure ability, the race tests a handicapper's acumen on several different levels. In general, sprint horses stretching out to a mile make poor wagers in this event.

Similarly, horse's who have shown solid form going further - at say, a mile and eighth - often don't have enough early speed to secure a good position in the race. Thus, it can be said that the race is a true miles event. While an exceptional horse like Wise Dan was able to win at longer distances, there was little doubt that the champ was at his best running a flat mile. Ditto for Goldikova and many other winners of the BC Mile. Early speed with a little bit of stamina is often the most lethal combination for a BC Mile participant.

In a race that had been dominated by European runners in recent years, the American gelding Wise Dan proved himself as one of the world's best in 2012 by defeating a celebrated group of foreign runners along with 2011 Kentucky Derby winner Animal Kingdom. Wise Dan assumed his customary place stalking the early speed before being unleashed in the stretch and holding off a late charge from Animal Kingdom, stopping the final timer in a record 1:31.78.