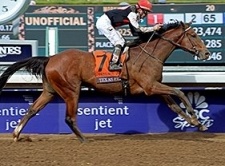 As a race that crowns the best two-year-old dirt runner in the world, the Breeders' Cup Juvenile carries a purse of $2 million. While the race was once considered a mere platform for precocious colts, the race has proven to be a launching pad for Kentucky Derby winners with Street Sense becoming the first juvenile winner to wear roses the following year in 2006 and Nyquist accomplishing the same feat in 2015.  [+]

The Breeders' Cup Juvenile is an annual showdown between the best two-year-olds on the east coast taking on their west coast counterparts. The race has also drawn a sampling of European runners over the years.

Occasionally part of the lucrative Pick 6 and Pick 4 betting pools, the Juvenile is almost always an excellent wagering race regardless of its position on the card. The fattened Breeders' Cup betting odds mean bigger payouts on wagers like the double, Pick 3, exacta, trifecta and superfecta wagers. Double digit win payoffs per $2 minimum wager have been the rule rather than the exception over the years.

Betting a great race like the Breeders' Cup Juvenile can be done safely and conveniently from a trusted online racebook, but the following recommended racebooks sweeten the deal through lucrative bonus, loyalty and rebate programs that put more cash back into player's pockets.

Regardless of the sport, fans always want a glimpse at the next rising star. The Breeders' Cup Juvenile is the biggest stage for some of the best and brightest young horses in thoroughbred racing. While not every great horse gets off to a fast beginning, the Breeders' Cup Juvenile has been won by such notables as Unbridled's Song (1995), Macho Uno (2000), Street Sense (2006), and Nyquist (2015) who all went on to robust careers. There's nothing quite like catching talent while it's still raw and undeveloped and that is why the Breeders' Cup Juvenile tends to capture the minds and hearts of racing fans and bettors all over North America.

Breeding plays a very significant role in picking the winner of the BC Juvenile. Carded at the mile and one-sixteenth distance, the race often features a large number of runners who are either unproven or completely untested at two-turn racing. In many instances, the race is loaded with early speed types who have won sprint races in gate-to-wire fashion. Thus, a useful lens for selecting a BC Juvenile pick can be to determine which horse has the breeding and running style to settle close to the pace and handle the longer distance. A basic understanding of pedigree goes a long way in determining which runner is likely to find the winner's circle in the BC Juvenile.

Similarly, trainers who excel with two-year-old runners have dominated the event with Todd Pletcher, Doug O'Neill, and Bob Baffert routinely showing up with strong runners each year.