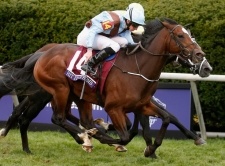 A popular addition to the Breeders' Cup expansion of 2007, the Juvenile Turf filled a logical end-of-year slot for precocious young grass runners and has become an anticipated race for North American and European racing and wagering enthusiasts. The one-mile event was contested for a purse of $1 million in 2016 and has featured several exciting renewals since its inception, earning grade 1 status in 2011. [+]

Like most Breeders' Cup races, the Juvenile Turf is capped at 14 horses with several participants earning automatic berths via the "Win and You're In" series.

Currently, there are five such automatic qualifying events spread among Ireland, England, France, Canada and the United States. With such a diverse array of quality runners and fattened Breeders' Cup betting pools, the Juvenile Turf is an excellent wagering opportunity whether bettors choose basic bets or more exotic opportunities.

Whether a serious bettor or just an occasional player, it's advantageous to find a trusted and secure online racebook. Betting online not only provides the convenience of enjoying the action from a laptop or mobile device, but it also provides increased profits. In today's competitive online market, these racebooks reward players with rebates, bonuses and loyalty programs.

The international flare of Breeders' Cup weekend adds to the intrigue of many races including the Juvenile Turf. American two-year-olds are generally thought to be a bit more precocious than their European rivals and the Euros are thought to be superior on grass. Through the first ten editions of the BC Juvenile Turf, the Europeans proved dominant, winning seven times.

Regardless of where the winner comes from, the race has tended to be a contentious betting affair with a square price assured.

Betting the Juvenile Turf requires a solid understanding of European form as many of the top contenders usually hail from across the pond. Bettors paying attention to trends and nuances have noted that the second or third betting choice among the European contenders has often proven to be the horse to beat. In some years, American winners such as Hootenanny (2014) and Oscar Performance (2016) have been available at generous prices as the betting tended to focus more on the Europeans. The race shape is usually marked by a swift early pace as many contenders in the field possess good gate speed. Winners such as Pounced (2009) and Hit it A Bomb (2015) came from the clouds to secure the top prize.

On the subject of European dominance in the Juvenile Turf, trainers Aidan O'Brien and John Gosden have played a major role with the former winning three times and latter twice. Jockey Frankie Dettori, always a fixture on Breeders' Cup weekend, has managed to urge three different winners home in the BC Juvenile while Irish jockey Ryan Moore has equaled that feat. 2016 winner Oscar Performance earned his third straight victory and stamped himself a serious American grass contender while winning at 7/2 odds and stopping the official timer in 1:33.28 - just shy of the 1:33.20 record set by Outstrip in 2013.