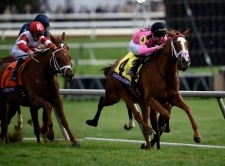 When the already-popular Breeders' Cup expanded to a two-day event in 2007, it was a no-brainer to include a race for two-year-old fillies on the grass. Thus, the Juvenile Fillies Turf was born and added to the Friday card. Since its inception, the race has been met with approval from bettors and the racing world. The BC Juvenile Fillies Turf puts the spotlight on young, female grass runners from North America and Europe. [+]

The race achieved grade 1 status in 2012 and routinely draws full and contentious fields. In a race that is not easy to decipher based on the credentials and form of lightly-raced runners, the BC Juvenile Fillies Turf has produced some large payouts and exciting finishes. Because of its usual placement as one of the first Breeders' Cup races of the weekend, the race takes serious betting action and features the usual assortment of traditional and exotic wagers stoked by the heavy Breeders' Cup pools.

Betting the Breeders' Cup Juvenile Fillies online is a popular choice as the race usually begins while most working-class folks are finishing up their Friday afternoon schedules. Trusted online racebooks provide a convenient, safe and reliable way to get in on the action, but they also increase profitability in the form of rebates, bonuses and loyalty programs. Check out these recommended online racebooks for a chance to enjoy the action from a laptop or mobile device.

While dirt racing remains the most popular surface in the United States, turf racing isn't without its ardent supporters. Races on the grass often feature tighter finishes and the opportunity to realize greater betting value than conventional dirt races. For bettors who enjoy a race with many variables and unknowns, the Breeders' Cup Juvenile Fillies offers plenty of both. In addition, the race has produced its share of future stars with horses like Catch A Glimpse (2015), Lady Eli (2014), and Stephanie's Kitten (2011) among the notable past winners.

While the BC Juvenile Fillies can be viewed as a crapshoot by some players, there are some simple angles that have proven successful. First, trainer Chad Brown has won the race three times from 2008-2016. Todd Pletcher, Wayne Catalano and Mark Casse round out the other winning North American trainers. All three have an excellent reputation for succeeding with young horses. Brown has been the preeminent North American grass trainer of his era. For all the advantages that European horses have in the other Breeders' Cup races held on turf, the advantage disappears in juvenile races as American training methods tend to push younger runners earlier in their careers. Another factor that bettors should consider when wagering on the BC Juvenile Fillies Turf is whether or not a runner has shown the ability to handle two turns on the grass in prior starts.

When Lady Eli surged to an easy score in the 2014 Breeders' Cup Juvenile Fillies Turf, she clearly announced herself as a serious runner ready for much bigger prizes. The win kept the precocious Chad Brown trainee undefeated in three starts and marked her as the best on the grass of her generation. In her three-year-old season, Lady Eli won a trio of stakes races, but was injured following her win in the Grade 1 Belmont Oaks Invitational. After a harrowing battle with the often fatal disease Laminitis, Lady Eli returned at four to win the Grade 1 Flower Bowl and lose by just a nose in the Grade 1 Breeders' Cup Filly & Mare Turf.