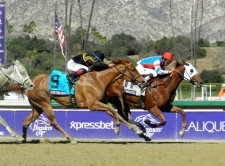 Added to the Breeders' Cup series in 2007, the Filly & Mare Sprint filled a necessary void in a popular division and category of thoroughbred racing. The grade 1 event is contested on dirt at seven furlongs instead of the traditional sprint distance of six furlongs. The race carried a purse of $1 million in 2016 and has been contested on both Friday and Saturday of the two-day Breeders' Cup event.  [+]

With fattened Breeders' Cup wagering pools, the Filly & Mare Sprint draws great interest from bettors across North America. The race is always part of the rolling daily double and pick three betting options and has occasionally been featured in the pick 4 and pick 6 sequences. Bettors also enjoy win, place, show betting as well as exacta, trifecta and superfecta wagering in an event that has proven to be an excellent wagering opportunity since its inception.

Betting the Filly & Mare Sprint - and all races throughout the year - from a reliable online racebook creates several advantages. First, the ease and convenience of betting from a laptop or mobile device allow players to stay in action even while on the go. Secondly, in today's competitive online wagering marketplace, the following racebooks offer lucrative rebate, bonus and loyalty programs that put more cash back into player's pockets.

Horse racing fans love a contest of pure speed and that is what makes betting an elite sprint race so appealing. The Filly & Mare Sprint adds the extra wrinkle of seven furlongs, giving handicappers a different dimension than the Breeders' Cup Sprint for male horses.

The BC Filly & Mare Sprint has produced some of the most intriguing fields and matchups of the year and has made its mark as one of the most anticipated events of the BC weekend. Past winners include such notables as Ventura, Groupie Doll and Judy the Beauty. Only the inaugural event was carded at six furlongs due to track configuration constraints at Monmouth Park.

The seven-furlong distance in thoroughbred racing tends to be a specialized event. Thus, extra weight should be given to fillies and mares who have proven successful competing at seven furlongs in the past. While seemingly a minor detail, handicappers often overlook the fact that many sprint horses who are proven commodities at six furlongs struggle with the additional eighth of a mile of a seven-furlong event. This may begin to explain why there has yet to be a gate-to-wire winner of the BC Filly & Mare Sprint. The race has favored horses able to stalk and pounce or close, rather than race directly on the lead.

Perhaps the best filly and mare sprinter in the new millennium, Groupie Doll cemented her legacy in the BC Fillly & Mare Sprint with consecutive wins in 2012 and 2013. Based in Kentucky, the William "Buff" Bradley trainee proved her ability to win away from the Bluegrass with a dominant score in 2012. Despite entering the race on losing streak in 2013, Groupie Doll once again proved to be racing's sprint Queen by posting another score. She remains the only filly to win the Breeders' Cup Filly and Mare sprint twice. Judy the Beauty, who finished second to Groupie Doll by just a half-length in 2013, returned to win the 2014 Filly & Mare Sprint.