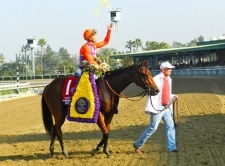 One of the original Breeders' Cup events, the Distaff was first run in 1984 and is the major, end-of-year championship race for fillies and mares of all ages on the dirt. Carded at the mile and one-eighth distance, the BC Distaff has an illustrious history and has featured some of the most thrilling races and matchups of all time. It has been won by such notable champions as Lady's Secret, Personal Ensign or Beholder.  [+]

When the Breeders' Cup assumed a two-day format in 2007, the Distaff became the featured event of the Friday card. As such, the race usually signifies the money leg of the Pick 6 and Pick 4, with both wagers attracting large betting pools. In addition to these multirace exotic bets, the Distaff almost always features a deep and talented cast of runners, resulting in generous win odds, fat exacta pools, and the possibility for large scores in the trifecta and superfecta wagers. The Breeders' Cup Distaff is among the best betting races of the year.

A reliable online racebook allows today's horseplayer to enjoy the ease and convenience of betting from home or mobile device, but that's just the beginning. With loyalty programs, bonuses and rebates, the best racebooks reward players in the form of cash and increased betting capital. Bet this year's Breeders' Cup Distaff from one of these recommended websites.

From Seabiscuit and War Admiral to Alydar and Affirmed, racing fans remember the marquee matchups among elite thoroughbreds competing for the ultimate prize. Over the years, the Breeders' Cup Distaff has featured more than its share of big-time matchups as the top fillies and mares have gone head to head in this race. The 1988 Breeders' Cup Distaff saw the undefeated Personal Ensign do battle with the Kentucky Derby winning filly Winning Colors.

The race lived up to its hype as Personal Ensign made it a perfect 13 for 13 while passing Winning Colors in the final strides over a muddy racetrack at Churchill Downs.

2016 saw a similar show with the unbeaten Songbird taking on the veteran and multiple Breeders' Cup winning Beholder. Songbird took the field every step of the way except for the very last one as Beholder somehow managed to put her nose down in front at the wire to become the only filly to win non-consecutive Distaffs.

Betting the Breeders' Cup Distaff, like any other Breeders' Cup race, often comes down to careful consideration of where the race is being run. 2016 winner Beholder was clearly a horse-for-course, having already won the 2013 BC Distaff at Santa Anita along with a handful of other grade 1 victories over her preferred surface. Of course, the same could be said of Songbird who lost nothing in defeat. Likewise, 2015 winner Stopcharginmaria was a top class animal at any racetrack, but had shown a particular affinity for Keeneland in previous races and during her morning workouts.

In yet another classic example, Zenyatta was undefeated and the best synthetic horse in America in 2008. Thus, her win in the Distaff and subsequent victory in the BC Classic in 2009 were of little surprise given her dominance over the old Santa Anita synthetic.

While the Personal Ensign v. Winning Colors and Songbird v. Beholder matchups have stood out, the overall quality of the Distaff over the years has been exceptional.

This kind of depth makes the race among the most intriguing of the year. Using 2016 as an example, the field also included Stellar Wind, who had beaten eventual winner Beholder in each of her last two starts, I'm a Chatterbox, an elite performer fresh off a dominant grade 1 performance in the Spinster, and other grade 1 winners such as Forever Unbridled and Curalina.

For all the high points of the race, many racing fans will forever lament the matchup that never happened when Horse of the Year Rachel Alexandra's connections elected to skip the event in 2009 instead of facing Zenyatta on a non-dirt surface.