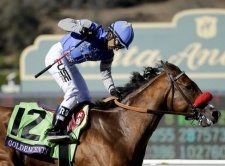 Inaugurated in 2007, the Breeders' Cup Dirt Mile was a race many felt was an overdue addition to racing's world championship day menu. As a matter of breeding and function, the one-mile distance is one that often provides a true indicator of a horse's speed and ability. With sprinters and middle-distance horses meeting in the one-mile race, horse players and fans enjoy the challenge and spectacle. [+]

Offered for a purse of $1 million in 2016, the BC Mile has become one of the most anticipated events of Breeders' Cup weekend, drawing some of the sport's biggest stars. Winners of the prestigious Met Mile at Belmont Park and Pat O'Brien at Del Mar are given automatic entry into the BC Mile.

With so much value to be had in a race like the Breeders' Cup Mile, the opportunity to play the race through a trusted online racebook, sweetens the experience that much more. In today's competitive online gaming market, players are able to take advantage of lucrative rebates, loyalty program, and bonuses that make it much easier to stay profitable. While going to the track on a big race day is tough to beat, online racebooks provide convenience and financial incentives the track cannot.

Since its inception, the Breeders' Cup Dirt Mile has featured some of racing's most unique and anticipated matchups of the year. In short, the Mile has proven to appeal equally to the connections of sprint horses who might benefit from a little extra distance and route horses who might appreciate a little less ground. These types of "tweeners" also square off against horses regarded as true one-mile types. The diversity and quality of runners in the field make the race one of the most dynamic events of the Breeders' Cup weekend. Couple that with the large betting pools and opportunity to make a serious score, and the Breeders' Cup Dirt Mile is a fan-favorite.

Because of the many variables involved, betting the BC Dirt Mile can be a high-risk, high-reward proposition. First, the informed bettor must understand the configuration of the hosting track.

At tracks like Churchill Downs and Belmont Park, the Breeders' Cup Mile would be a one-turn event. However, at Keeneland, Santa Anita, Monmouth and most other tracks, the race would be a two-turn event. Occasionally, a horse like 2016 winner Tamarkuz, will show a great appreciate for the switch. After racing almost exclusively at one-turn in New York, Tamarkuz proved to enjoy the two-turn mile at Santa Anita. The Breeders' Cup Mile is a race that usually features a good deal of early speed, making it crucial for handicappers to develop a sound understanding of pace.

Through the first ten years of the Breeders' Cup Dirt Mile, the race has produced two bonafide longshots in Dakota Phone (2010) and Furthest Land (2009). Generous prices were also recorded on Albertus Maximus (2008) and Tamarkuz (2016) with both horses going off above 10/1.

However, the race has also been formful with the heavily-favored Liam's Map (2015) and Goldencents (2013 & 2014) doing what was expected. In the first running of the BC Mile, Corinthian splashed home at 7/2 in a torrential downpour at Monmouth Park defeating the previously unbeaten Discreet Cat handily.