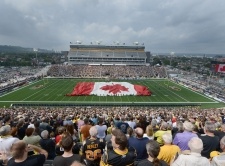 Opening in 2014, the Tim Hortons Field replaced the iconic Ivor Wynne Stadium as the home tur of the Hamilton Tiger-Cats. The stadium was designed to also include soccer and track and field/athletics events and for the upcoming 2015 Pan Am Games where it was briefly referred to as the CIBC Hamilton Pan Am Soccer Stadium. [+]

The Toronto Argonauts temporarily used it as a home stadium when they had scheduling conflicts with the Toronto Blue Jays and local amateur teams like the McMaster Marauders CIS football team also do so occasionally.

Despite being one of the smaller football stadiums, the Tim Hortons Field features some modern amenities. The Pioneer Energy Endzone is their fanzone with multiple vendors and one of the largest circular bars in Canada. The videoboard is high-definition and 20% larger than any videoboard from the Ivor Wynne Stadium while also having HD screens. The sound system has been upgraded and the Legacy Wall, which pays tributes to season ticket holders.

The Tiger-Cats or "Tabbies" have a tale of two halves. For their first 40 years, they were a model of excellence missing the playoffs only three times and winning seven Grey Cups. They were also the first team to win the Grey Cup at home in 1972. However, since 1990 they have barely made the playoffs and have won just a lone Grey Cup in 1999. They set a dubious record in 2003 when they only won one game. Backed by new management however, the franchise has been resurgent and have become Grey Cup contenders again.

Hamilton isn't exactly known for being a major tourist destination but there are plenty of great hotels within the Tim Hortons Field's vicinity. The Crowne Plaza Hotel gets good reviews for its friendly staff, generously-sized beds and overall comfort. It's about two kilometers away. The Staybridge Suites is a bit further but has a homelier design, is clean and has great breakfast. The Budget Inn 2000 is the nearest to the stadium and lives up to its "budget" name if you're not looking for the fanciest place to stay.