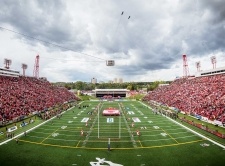 The McMahon Stadium is a classic. Built in 1960, it has been Calgary's go-to stadium for all things football from the University of Calgary Dinos to the Calgary Colts of the Canadian Junior Football League and of course, the Calgary Stampeders. It also served as the 1988 Winter Olympics' opening and closing ceremony and has undergone a few renovations bumping up the seat count... [+]

The stadium was named after Calgary oilmen Frank and George McMahon who donated $300,000. The stadium received upgrades in several years beginning in 1975 when they installed artificial turf to replace grass. 2013 saw the addition of modern tech like LED sideline signage, FieldTurf suface and expanded seating. A new 30x50-foot scoreboard and 11x40-foot auxiliary were also implemented to complete this refresh.

Watch out! The Stampeders are running through the competition. That certainly is the case in recent years as they've accumulated the league's best cumulative record in the last decade and have won three Grey Cups (eight in total). The "Stamps" are the third-oldest active franchise in the CFL having officially been founded in 1945. Led by the finest front office, the Stamps built a dominant franchise that consistently features a great QB, elite Canadian players and a winning mentality.

Located to the north side of Calgary, the McMahon Stadium is conveniently placed close to the highway along with several hotels. The Best Western Plus Village Park Inn is a moderately priced mid-tier hotel suitable for a family trip with its pleasant staff and colourful accomodations. The Holiday Inn Express is a bit further but has spaceous rooms with free breakfast on the weekends, which is when the Stamps usually play. It's a short drive away but the Centro Motel is one of the province's best budget hotels. For cheap, you get free breakfast, a stylish room and excellent staff.